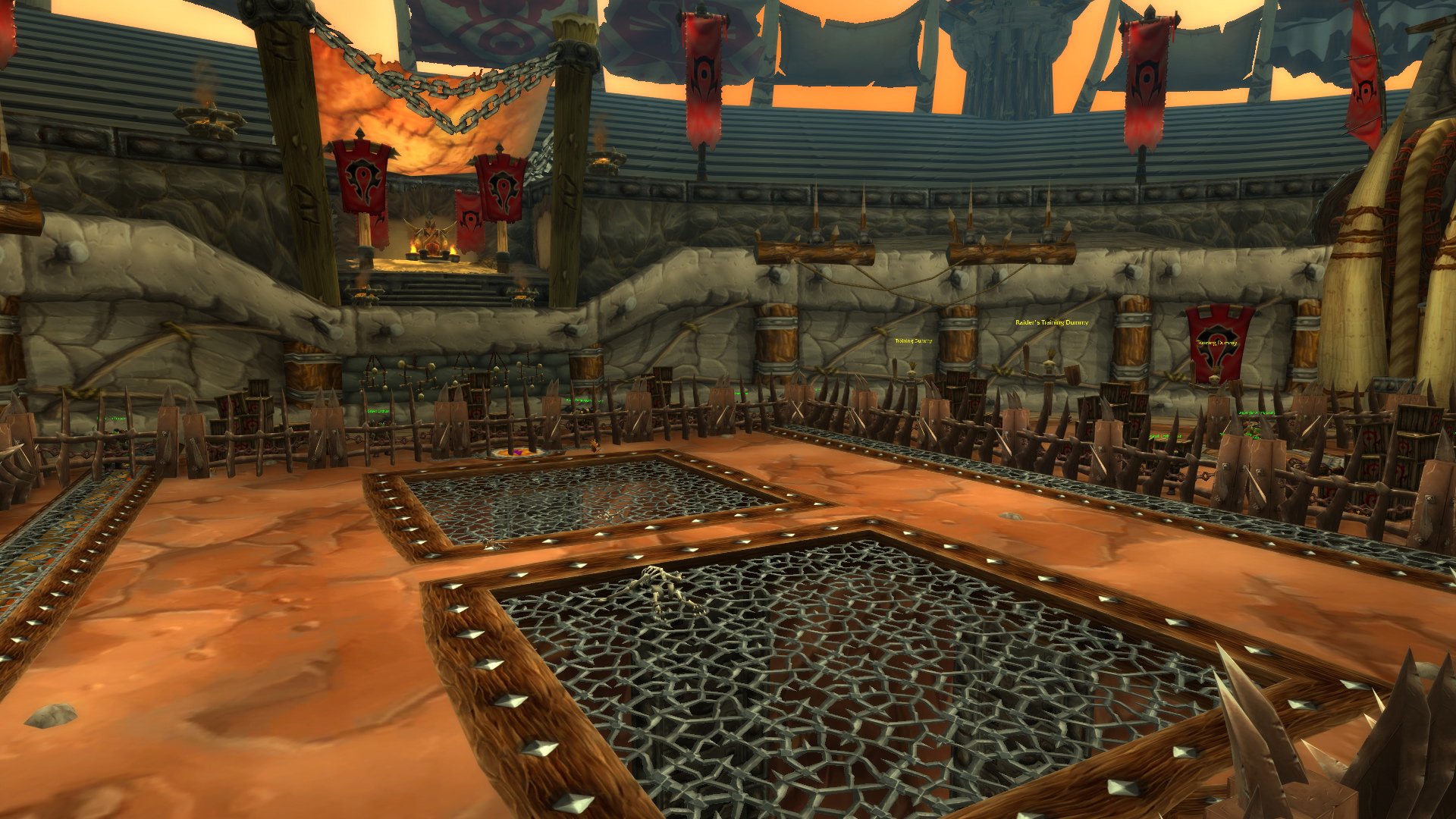 After finishing up all the Brawler’s Guild achievements last night, I’d like to type up a quick guide for those looking to get this done before 6.0 drops and they are no longer obtainable. It’s very doable if you’ve got some decent LFR/Timeless Burden gear, so let’s get to it!

Getting Started and General Tips

To get in, you need a Brawler’s Pass or a Blood-Soaked Invitation. Easiest way is AH, but if you’re unlucky, they’re always on the BMAH, and have a chance to drop from the PvP rares in Krasarang Wilds. (It also has a 100% chance to drop from Willy Wilder, if you’re willing to camp for a while.)

The format is simple. After queueing, you’ll be dropped into the ring, and have to fight a boss enemy (or enemies) and defeat him within 2 minutes. The main ladder has 36 bosses that must be defeated in order; after every 4 you defeat, you go up one Rank. There are also 16 “special” bosses that can be fought at any time; however, 12 of them require you do various things to unlock the card needed to battle them.

You will want to buff up. A vendor at the Guild sells cheap DPS potions, which are essential, but you’ll want a flask as well. Heroism drums are also nice, as are buffs from any other players around. If you want to completely trivialize some of the fights, you can also go farm some Faintly-Glowing Herbs from the Timeless Isle, which will work in Brawler’s Guild and have no cooldown.

None of these bosses should be difficult, a few just have some tricks. Dippy (Rank 2) has a one-shot attack, but every attack from you knocks him back; you’re fine as long as you don’t corner him. Ixx (Rank 3)’s attack is best avoided by sitting directly on top of him while DPS’ing, but with good gear you may be able to burst him down without ever seeing it. Deeken (Rank 4) is your first “avoid tons of stuff” boss, and is a good sample of what awaits you at higher ranks.   You might have to try them once in order to see all the things you need to avoid, but that’s it. There’s a decent guide here.

Now is when things start to get interesting. GG Engineering is likely your first challenge. There’s a gnome who shoots you and a goblin you launches rockets at you; stay on top of the gnome so that he takes damage from the rocket blasts.

Dark Summoner is simple in theory. The Summoner brings in ghosts, which have an instakill melee attack, but you get a “flashlight” (cone attack) that stuns them. Killing a ghost drops Summoner’s shield for 20 sec. With good gear, you should be able to burn Summoner in 1 ghost sequence; just keep away from other ghosts that spawn. Turn on nameplates (V key).

Battletron will test your ability to DPS while moving. The boss summons 8 bombs that orbit him constantly and blow up when touched. You’ll want to run into 2 of them with a damage-reduction cooldown up (like Survival Instincts) to give you a window. After that, stay in that window circle-strafing around him until he dies. Beat him, enjoy the next joke boss, and get ready for the hardest fight of them all.

YOU FACE HEXOS, ROTATION LORD OF THE GEOMETRY LEGION!

If you’re not prepared for him, Hexos will make you rage-quit. The mechanic is brutally simple: You’re stuck in the middle of the arena, Hexos is stuck to your face, and waves of laser beams come at you. All you have to do is quickly and accurately rotate the camera to “steer” through the lasers while executing a DPS rotation at the same time.

There’s no way to make this easy, and you can’t really outgear the fight to the extent needed to avoid the mechanic. In lieu of a walkthrough explanation, then, here’s a list of tips that helped me, which may or may not help you.

Compared to Hexos, the rest of the Rank 8 bosses are a breeze. For Tyson Sanders, just play hit-and-run, keeping him dotted as you evade chickens. For the T440, run out of melee at 15 stacks of the debuff, let it drop, reengage and repeat. Finally, Anthracite is similar to Dark Summoner; use your special action (water spray) to make the boss vulnerable, DPS him, then kill one of the adds to recharge your spray and repeat. Note the spray points rearward (insert joke here) so face away from Anthracite when firing.

Big Badda Boom is your first fight, and a good appetizer for the much harder boss to follow. When you kill him, he explodes and spawns 2 smaller versions of him. Those likewise split and spawn 2 versions, etc, until you suddenly have 20+ hitting you. Not too tough as long as you take the fight slow and don’t kill too many adds at once; use Ysera’s Gift and Predatory Swiftness procs to keep up your health, and pop SI + Barkskin + Berserk for the final burst.

Next is Nibbleh, who’s the next “ugh dammit” boss.

The video encapsulates the fight strategy pretty well. Nibbleh leaves a trail that will buff him to a level where he will one-shot you, so you have to keep him moving around a rapidly-closing spiral. He also occasionally spits a bit of trail to a random sport in the arena. This is the frustrating part, not for the spit, but because he’ll sometimes stand still long enough from spitting to gain his buff, and there’s nothing you can do.

You can try the strat in the vid (turn on walk and constantly backpedal) but it didn’t work for me, perhaps due to Cat Form’s built-in speed increase. He constantly enraged in the corners. After that, I switched to running and constantly tapping back, and that worked well enough.

Doctor FIST, after Nibbleh, is essentially a joke boss; just stay close to him to evade his clearly marked attacks, and use Bash/Typhoon to interrupt his fifth attack, Hammer Fist.

Ahoo’ru is the final fight between you and Rank 10, and a worthy challenge.

It’s a two-phase fight. In P1, Ahoo’ru will walk to the middle, put up a shield, and fill the room with sparks that move randomly and hit for about 200k. He’ll also send out three larger flashes (1 at a time), which will be extra sparkly. Touching these will spawn an Angel; DPSing the Angel to 50% will cause him to start casting a Charge. Run to the other side of Ahoo’ru, let the Charge hit him, and repeat twice more to trigger P2, which is mostly a straight burn phase. Ahoo’ru’s only abilities here are summoning a ring of circles around you (run out, you’ll take about 200k damage as long as you only touch 1 circle) and casting one full-heal, which must be interrupted.

Phase 1 is the key; the better gear you have, the more time you can afford to take there. Well-geared players can use the strategy depicted in the video, touching each spark and killing each Angel in turn. Lesser-geared players will need to trigger all 3 Angels together, then AoE them to trigger 3 charges at once. Either way, push hard in P2 (don’t forget to pot) and collect your mount + achievement!

Aside from the ranking bosses, there are the original Rank 8 bosses (now called “special bosses” that can be fought. They were all quite difficult back in 5.0/5.1, but gear has trivialized them all to Battletron level, with the strategy for each being summarized as “stay out of bad, and AoE to start (Zen’shar)/jump a lot (Disruptron)/interrupt Blue Crush (Epicus).” Milhouse is a bit different; he summons energy sources that charge him via beam; you’ll want to stand in the beam and charge yourself instead. Let the first set of beams charge both you and him, and them start killing one source and standing in the other.

There are also 12 “challenge” bosses, that are found by doing various tasks to unlock hidden quests. Instead of reciting everything here, I’ll just link you to a guide by Pwuebear on wowhead that excellently covers how to unlock them and strategies for the fight. None are especially difficult as long as you follow the strat. Best of luck, enjoy your achievement, and stay tuned for my Proving Grounds guide to come soon!TM