inferiorlol wrote:I did something along that lines with your WA bleed code as base.

I just added a new variable:

to the Feral Stat Logic aura, and then I made a new weakaura to snapshot this to another variable at a button press (I chose Aquatic Form since I figure I would never accidentally use that in a raid).

I then make a new aura to return the ratio between these two variables. As of right now you need to have a target with the correct level you want to snapshot against since your code uses that to calculate the CrittEffMult. Very basic but it works pretty well for me.

If you don't want to trigger on a spellcast, you could just make a macro to execute the relevant code (with /run) -- something like

The "new" weak aura (been there for quite some time I see) that Stenhaldi made, still seems to bug with the 4 set bonus.
Applying rip with feral fury and I get the value of 165.
Top

I can't reproduce that issue. To be clear, you're using the version from this post?

Also, did you disable or remove the old version? They use the same global variable names, so if you are running both, it will result in unexpected behavior.
-Stenhaldi (Midwinter guild (retired) / twitter / youtube)
Top

Is the last pastebin link the last version?
And is it compatible with WA 2.0?
I've installed it, but the current amount of CP is not taken into account when calculating the ratio: I apply a 5 CP rip, generate a single combo point, hit TF and it says "114" which is obviously wrong. Looking at the code it looks like it's reading the CP value, but for some reason it doesn't work right....

EDIT: ok it looks like it's using the Rip5 value in the ratio, so the effect of CPs does not appear. I changed the variable name to use the Rip (instead of Rip5) and it's ok.
Top

That's intended. The display assumes you intend to cast rip at 5 combo points. That is, the "tick damage your rip would do if you were to cast it" (i.e. the divisor of the "bleed ratio") assumes 5 combo points.

It's just the "tick damage of the rip that you already cast" (the dividend of the "bleed ratio") that actually takes into account the number of combo points you cast at.

I did this because I think it's the most useful way to deal with combo points. Obviously if I actually did cast a rip at low CP, I want that to be reflected in the display. But when considering how much damage my rip would do if I were to recast it, I want the display to reflect what would happen if I cast a 5-CP rip. It's better for planning, since I typically cast rips at 5 CP -- and if I do intend to cast a low-CP rip, it's easy enough to just do some mental arithmetic.

But yes, as you observed, it's easy to change this behavior if you don't like it: just change WA_stats_RipTick5 to WA_stats_RipTick in the Rip Ratio custom text.
-Stenhaldi (Midwinter guild (retired) / twitter / youtube)
Top

Stenhaldi wrote:I can't reproduce that issue. To be clear, you're using the version from this post?

Also, did you disable or remove the old version? They use the same global variable names, so if you are running both, it will result in unexpected behavior.

Yes I am using that one. They shouldn't be conflicting with each other (disabled afaik), but I'll make sure/try again when I get home.
Top

Stenhaldi wrote:That's intended. The display assumes you intend to cast rip at 5 combo points. That is, the "tick damage your rip would do if you were to cast it" (i.e. the divisor of the "bleed ratio") assumes 5 combo points.

Ok, for me it's the opposite, I prefer to know what happens if I hit rip now, since by the time I get to 5CP it could be that some auras are down. It also tells me when it's worth to cast a 4-CP rip. Anyway it's good that it's easy to customize

After importing the string, from the post you mentioned above, I kept getting this LUA error.

my first post and i want to use it for a big thanks for this Code. It increased my overall damage alot and gave me some spare time to actually watch my surroundings more. My biggest issue was/is to program with lua. I've learned how to write basic codes but i lack in syntax for lua. Do you have a good tutorial, especially for WoW? Because i wanted to make one for my Warlock and dont want to use more Addons.
Top

I'm not familiar with any tutorials, sorry. I just kind of taught myself by writing and modifying scripts and looking up syntax as I needed it.
-Stenhaldi (Midwinter guild (retired) / twitter / youtube)
Top

Hi,
I've been trying to change your setup in a way that the numbers display on class timers and change the color of the progress bars but I have not been successful. How could I go about doing that? I would appreciate any help.
Top

This looks awesome. How do I use it in TellMeWhen? I'm going to start looking into that now, but any pointers would be great. I'm a programmer, but don't know any Lua.

Deducer wrote:Hi,
I've been trying to change your setup in a way that the numbers display on class timers and change the color of the progress bars but I have not been successful. How could I go about doing that? I would appreciate any help.

ClassTimer the addon? I'm afraid I'm not familiar with it, but unless it allows custom code, that's likely not something you can do conveniently.

Changing the color of a bar is certainly something you can do in WeakAuras, though. Just set that bar to use a custom color function (animations tab, main, custom type, color, custom function) that looks something like
Spoiler: show

(a custom color function should return red, green, blue, opacity in the range [0,1])

Deimhne wrote:This looks awesome. How do I use it in TellMeWhen? I'm going to start looking into that now, but any pointers would be great. I'm a programmer, but don't know any Lua.

Likewise, I'm not familiar with TellMeWhen, but unless it allows custom code, that's probably not something you can do conveniently.
-Stenhaldi (Midwinter guild (retired) / twitter / youtube)
Top

If i open Weak Auras or start combat i always get three lua error:

What is causing these errors?
Top

Hi, thank you for your WA, it's working fine, I just have a little issue with DoC, I'm using the french client, and it seems the DoC's multiplier isn't working (if I apply rake without DoC, then I cast HT, I still have 100 rake's score on my screen).
I went into the code and changed

but it still doesn't work.
I don't know if I should change something else in the code, I'm sure of the spelling (I checked multiple times). Do you have any idea where the problem comes from ?

Thank you for your time !


EDIT : I re-launched the game and it seems to work, false alarm ! Thank you very much for your WA !
Top

Spoiler: show
Updated for WOD Beta as of September 04 2014
http://pastebin.com/thFU80hy

This also works for Focus Target Rake AND Rip (included in import), I didn't bother with Thrash since I assumed it would be the same value for all aoe'ed targets

Note: this was coded on Live and was functioning properly. My options menu is broken on beta so someone will have to test it

Hi, I've just used this script and it is working fine but I don't know why rip's percentage doesn't appear in my screen. Rake and Trash has the same features and I'm able to see them. Thanks in advance for the program Stenhaldi ! Hope someone can help me.

Edit: I notice that DoC is not working as well. Is anyone still using this program or have a similar one that isn't the WoD Beta? Should I change the rip trigger from its name to its ID ?
Top

Mainly an edit from Stenhaldi's.
Has the following features:
Tracks Rip/Rake on target and focus
Tracks Thrash on target

Encountered the following issues:
Can't track "Prowl" using buff ID (5215) or IsStealthed() for Rake, I think it is because Rake is split into two parts (Stun + Damage) and the Stun component executes first.
Casting Rake (1822) places a Rake debuff which has as different spellID (155722) from live. I think it is "Improved Rake" or something. May need to add 1822 back in for 6.0 level 90 since we don't have improved Rake until level 100. Took me ages to figure out because I didn't have an addon that tracked SpellID.

Images of what all the numbers calculate out to.
Spoiler: show 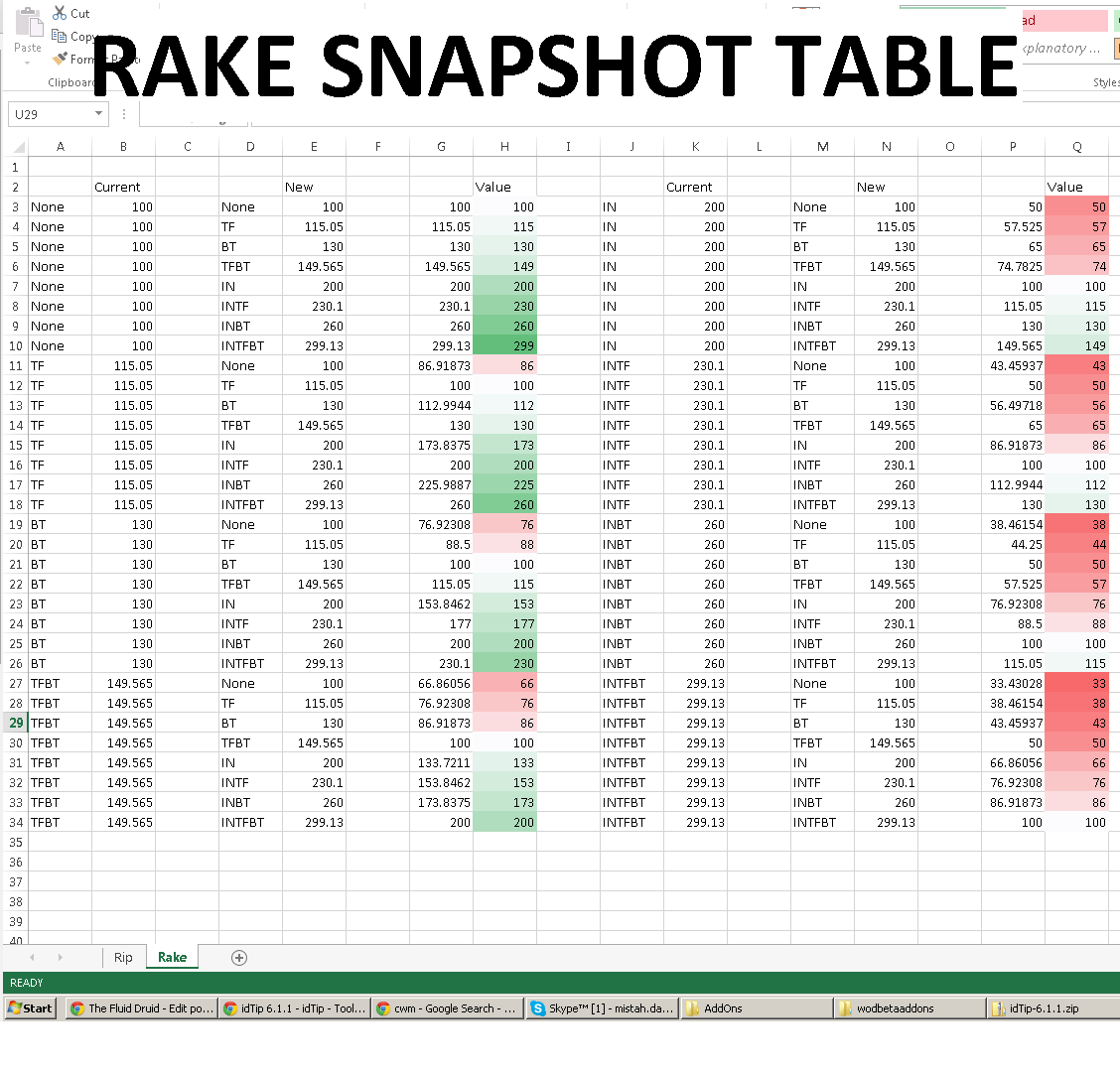 Returning to Feral, I want to improve my play by doing something I didn't do last time: bleed clipping. I pasted the code Stenhaldi linked to into WeakAuras 2, and I'm getting an error: 'Error deserializing ...llMeWhen\Lib\AceSerializer-3.0\AceSerializer-3.0.lua:175: Supplied data misses AceSerializer terminator ('^^')'
Top

I've been playing bear this whole SoO and for tracking i've used only RoguePowerBars.
Now with feral, i configured RPB to work as it works with rogue and bear. I found this thread and ofc wanted try WA2 and imported BleedRatios but im not getting it work for some reason.

I installed WA2 and imported Bleed Ratios to my work cpu and they work like a charm. now, the only thing i could imagine bothering WA2 is RoguePowerBars since i dont have it installed in work cpu.

Ofc it might be something else, but have any1 else found problems with other addons?

I also tried the other one, Last Tick with WA2 and it worked with my home cpu.
Top

To prevent confusion I am going to lock this thread. The new WoD thread is here http://fluiddruid.net/forum/viewtopic.php?f=11&t=5020
Top
Locked
73 posts