Edgy/Raffy's Catus Thread (Not 6.0 Ready Yet)

Try the above update, let me know if that fixes it. It automatically downloads the hacked cloak file and pulls the updated heirloom files. Additionally, I'm testing out a new feature, which avoids redownloading the entire item database. The hacked cloak file matches the cloak data that Zstriker posted for 600-616.

Edit: and I've been just notified about the proper fix for the cloak, so I removed the hack and released Catus 38.
Warning: do not use the hacked file with Catus 37 or 38. Catus will automatically delete any existing file on launch to be sure.
Edgy (Suramar) / Catus: Feral Simulator / Apparatus: Paper Doll / Focus: Hearthstone Simulator / Hearthstone Calculator
GitHub: WarBase / WarDBC / WarKit / Catus 2

Hi!
I got a bug when importing reforge status to the AMR addon, it keeps me telling that i must upgrade some of my items, however, they are all upgraded accordingly to catus "import from armory"

all my six upgraded items reports the same way... prints below


Catus import from armory shows the trident as 582

however, AMR addon tells me to upgrade to 570

is this a problem on the string generation export from catus to AMR Addon??

btw, already deleted and reinstaled Catus, deleted profiles and re-imported them from armory.. also tried the reforge a couple of times

Thanks in advance
[email protected]
Top

Oh, good point. I actually don't know how AMR does their upgrades now. Their method was really wonky before. Let me download the addon and figure out what they're doing. You are correct that the string is being exported wrong.

I'll have a fix in a few.
Edit: I don't believe their addon supports Asia 6/6, but I can do up to 4/4 for US.
Try this: https://dl.dropboxusercontent.com/u/298 ... MR4of4.zip
Edgy (Suramar) / Catus: Feral Simulator / Apparatus: Paper Doll / Focus: Hearthstone Simulator / Hearthstone Calculator
GitHub: WarBase / WarDBC / WarKit / Catus 2

their addon was a lil f'up yesterday, but it came to a fix today... about the same thing: upgrades
Top

Can someone please help me, I'm unable to download v38 it keeps telling me that access is denied.
Top

Since last night i keep getting this error which doesnt allow me to open catus.Any sujestions?

When i use Catus v38 it can not import my char.
when i push the "armory" button it adds .com in the end of the url.

Is the same bug following the "import" button as well?
Top

raffy wrote:@Zstriker, thanks for the screenshot. Assuming 600 and 604 weren't changed, the hacked cloak JSON from above should do the trick until I've figured out what exactly Blizzard changed.

@Dargaron, sorry for the troubles. I'm trying to think of what could of caused this. A lot of settings get serialized into the preference storage, and easily one of those could throw an exception at some unexpected location. If something like this happens in the future, try launching Catus from a console so you can see if there is any uncaught error output. Catus blindly remembers window position, possibly it positioned the main window far offscreen? Right after the boot sequence finishes, it loads preferences, and then shows the main window. If it happens again, I can give you a little Catus debug program to run to help me uncover the issue.

From memory, I pressed the + button for the first time ever to make another profile, but didn't do a whole lot with it. I can't remember what else I specifically did - but it's all good now anyway. The fix was easy in the end, and thought I'd share to help others out. Not having a dig.

@Dargaron, when you hit the green plus, nothing should change except the configuration # and name in the floating bar at the top of Catus.

@Theostaltos, I can't read that language but it looks like you are trying to launch Catus from a compressed archive. You need to expand it to a directory, then launch it.

@Boxxydrood, what is saying access is denied? Your web browser? Are you a first time Catus user? Catus should autoupdate if you already have Catus. Here is an alternative download location: http://raffy.antistupid.com/wow/catus_old/Catus38.zip

@coremeeko, who is your druid? There are 5 "shìftycent" in US and 6 in the EU. What do you mean it adds .com to the URL? What URL? (Import) imports. (Armory) takes you to the armory. Both depend on the druid entered being valid.

Like Theostaltos, I get the same error when I open Catus for the first time. I have never used it before, so I do not have any resources downloaded other than the install file (Catus38.zip). As soon as it loads, it checks for an update. It looks like in the update box, there is a message about resolving hostnames or something similar, then it throws the error that Theostaltos posted. This is happening on two different computers, one is running Windows 7 and one is running Windows 8.1.
Top

For the sake of troubleshooting:
Spoiler: show 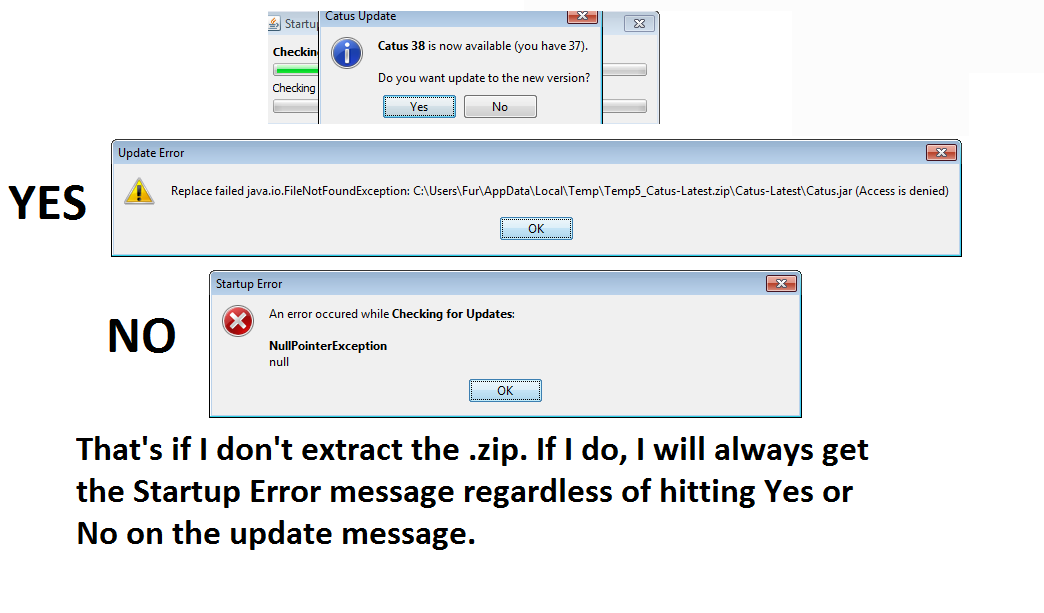 Expand the zip archive first (which should be a Catus-Latest folder), like to your desktop or something, then launch Catus from there. In the future, I'll try to add a detector for this situation.
Edgy (Suramar) / Catus: Feral Simulator / Apparatus: Paper Doll / Focus: Hearthstone Simulator / Hearthstone Calculator
GitHub: WarBase / WarDBC / WarKit / Catus 2

@Theostaltos, I can't read that language but it looks like you are trying to launch Catus from a compressed archive. You need to expand it to a directory, then launch it.

it doesnt seem to matter.Even if i extract it or not i still get the same error.
In any case catus was operational for me before last night but since the update it stopped working.I tried it in 3 different computers and i m getting the same error
Top

I did that too as stated on the 1st pic. 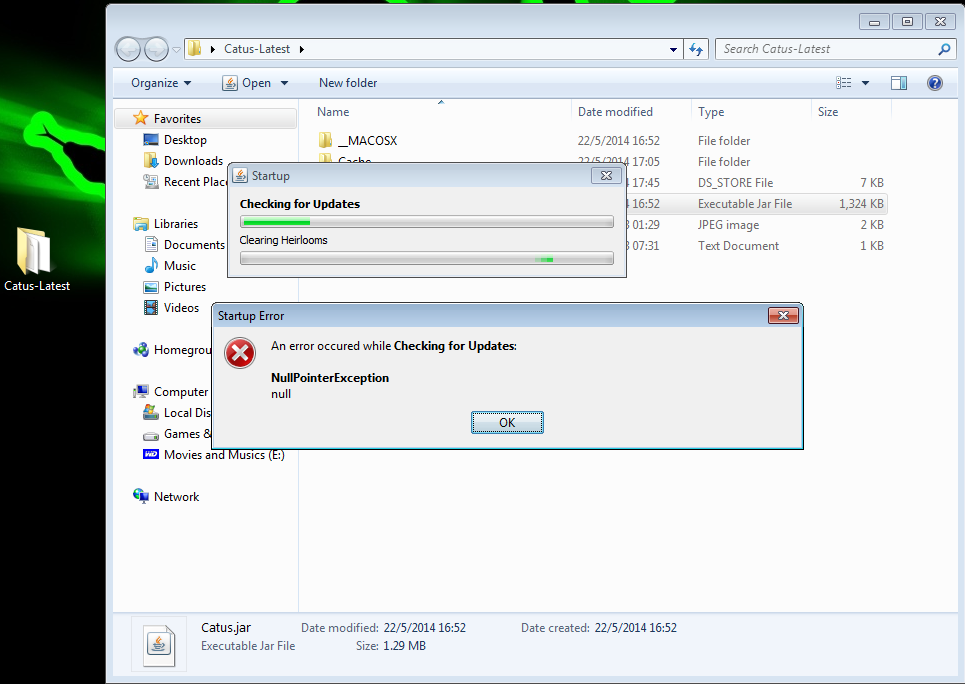 Oh sorry, I didn't read the pic text, I just saw the /Catus-Latest.zip/ in the path.

Can you launch Catus from a console for me? Navigate to the Catus directory, and then execute: "java -jar Catus.jar"
If I see the error that's getting spit out (since the dialog error dialog is super useful :p) I can fix this very quickly.

Did this problem originally happen after Catus auto-updated itself?
Edit: ok, I see the problem now, I'll fix this in a sec.

Edit: to confirm, in the Catus folder there should be a Cache folder. If there isn't, create a "Cache" folder. Inside that folder, there should be "raffy.antistupid.com" folder, if not, create it. Then try launching Catus again.

I think the problem is that on fresh Catus installs, the code that wipes out the heirlooms and hacked cloak fix on first launch, blows up when the proper Cache structure doesn't exist.

I don't know if this is what you're asking for Raffy: 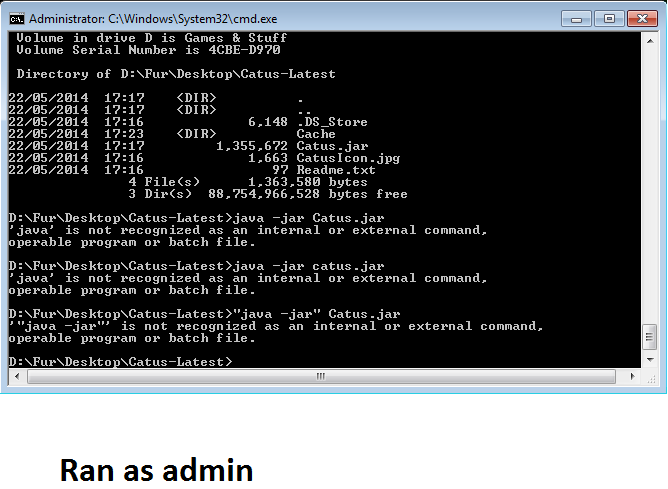 It happened with the auto update yes. I had it open yesterday in the evening with no issues, started today.


EDIT: Creating the folder "raffy.antistupid.com" inside the empty Cache folder fixed it.

Yes, problem is idd fixed!
Thanks a lot!
Top

I can't get it to work at all, I download the lastest version, attempt to run it nothing happens, asks me what I want to open this program with, pre update everything worked fine, and when i try to extract all it is says is do a problem with extracting and if I want to extract without encryption. @Ekthelion, has the problem fixed itself or is it still happening? Inside Catus-Latest/Cache/raffy.antistupid.com, there should be a file called "Item_99328.json" -- try moving it somewhere else (like to the Desktop) and then restarting Catus. Currently, the item appears fine on my API: http://raffy.antistupid.com/wow/items.php?id=99328 Occasionally, my API has to reject incoming requests. Catus is supposed to re-request these items at a later time.
Edgy (Suramar) / Catus: Feral Simulator / Apparatus: Paper Doll / Focus: Hearthstone Simulator / Hearthstone Calculator
GitHub: WarBase / WarDBC / WarKit / Catus 2

Released Catus 40 with some improvements:

- added new Quick Compare mode called "Quantify", uses the Student-T Distribution to terminate simulation once the two distributions can be determined to be statistically different from each other. This is useful if you want know if A > B, however it terminates too early to say exactly how much better A is than B. It runs 1000 iterations for both simulations and then terminates once it has 99.5% confidence.
- also added %-difference to Quick Compare
- added Feature: "WoD Perk: Berserk" to emulate +50 energy gain during Berserk
- added Quick Compare: Benchmark: "HotW/FoN vs SotF/DoC", various "Rune Color vs Color"'s, "WoD Perk: Berserk", and "Weapon: Current vs Swap (Reforged)"
- added Combat Preparation: "Custom Starting Energy" (can be negative)
- added "Use Recommended Encounter" and "Reveal Cache" buttons
- added Equipment > Copy > "Restore from Armory" to just copy your gear from your armory (whereas reimporting pulls in your talents/race/etc...)
- added some more tooltips
- added confirmation dialog for sub-10sec combat times
- added Experimental Feature: "Register Catus" which associates each Catus application with an unique identifier. I am only recording your email address to help associate your account. The email is not used for anything. You can use a completely fake email as long as it structurally valid. This is the start of a feature planned for Catus2, where Catus will gain some server-side/publish/sharing functionality. This feature is completely optional and you can register/unregistered at anytime.

Edit: I found a bug with [x] Inert in Simulator: Stat Weights. I was trying to compute stable weights to resolve Aggixx's question http://fluiddruid.net/forum/viewtopic.p ... 525#p22599 but I kept getting Agility > Secondary using Yellow and Inert, doing Agility vs Grouped Secondaries. Inert stats are invisible when the Rune proc type is computed but I forgot to add them back when the size of the proc is calculated. For this specific setup, turning Inert off doesn't impact the results (since 1:1:1 is still preserved) and produces the proper weights. This will be fixed in the next update. The proper result is that over a wide range of deltas, Secondaries are slightly better than Agility (hence we gem Yellow.)

However, it still doesn't explain how Eng/Ench(+320 Agility) consistently beats Eng/BS over a wide variety of samples for DoC/SotF with Yellow reforging. They're almost exactly the same but the Stat Weights (and reforging colors) suggest that more Yellow is better (and this is a 320 Agility : 640 Secondary swap with no socket bonus/reforging issues) yet the Agility-professions comes out ahead.

raffy wrote:@Ekthelion, has the problem fixed itself or is it still happening? Inside Catus-Latest/Cache/raffy.antistupid.com, there should be a file called "Item_99328.json" -- try moving it somewhere else (like to the Desktop) and then restarting Catus. Currently, the item appears fine on my API: http://raffy.antistupid.com/wow/items.php?id=99328 Occasionally, my API has to reject incoming requests. Catus is supposed to re-request these items at a later time.

@raffy
At first I had problem only with the cloak. Then I moved all the files from the folder and I couldn't see anything equipped anymore.
edit: on Linux everything works so it's something with my particular Win7x64 configuration.
Da Vuhdo iz wid'ya mon!

@Ekthelion, I made that error a bit more verbose in Catus 40. Can you do the same experiment you did above? It sounds like your Win machine is having difficulty connecting to raffy.antistupid.com.

@aggixx, when I uncheck a slot, it blocks all modifications of that item. Oh I see, are you using Minimize Cost? That seems to mistakingly not respect the check state when it shifts the gems around. Or are you doing something else?
Edgy (Suramar) / Catus: Feral Simulator / Apparatus: Paper Doll / Focus: Hearthstone Simulator / Hearthstone Calculator
GitHub: WarBase / WarDBC / WarKit / Catus 2